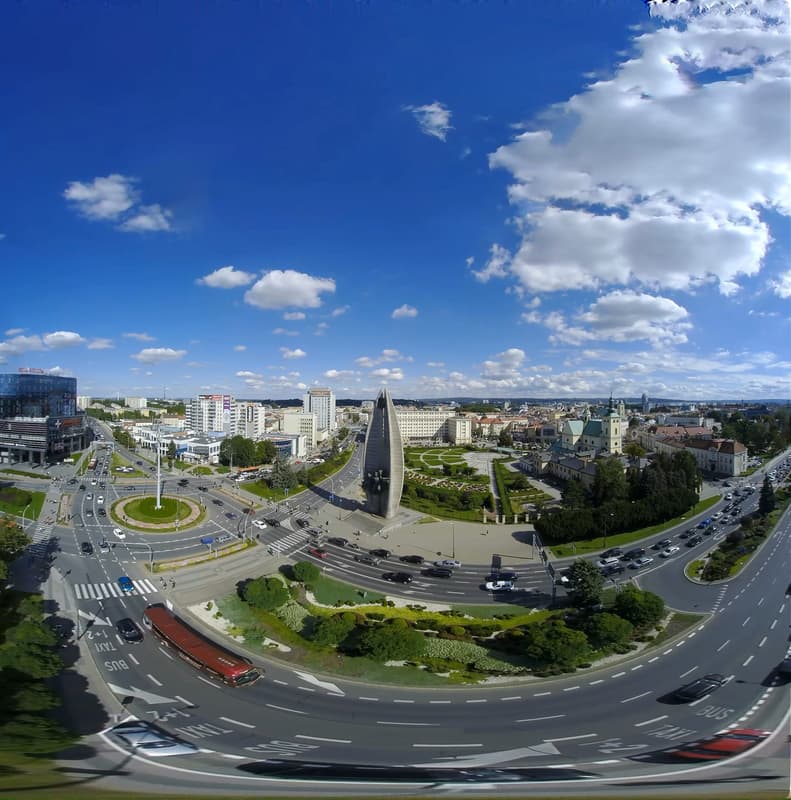 In 2020, we made a VR promotional video for the Rzeszów City Hall. Rzeszów VR is a promotional clip shot in VR180 technology showcasing the city’s most interesting landmarks through the eyes of young people.

In the film, we follow a pair of tourists played by Rzeszów actors Marianna Skupień and Maciej Owczarek, who come to Rzeszów for a city break. The characters land at Jasionka Airport, explore Rzeszów’s Market Square and 3 Maja Street and visit local restaurants. They also attend a concert during the European Stadium of Culture festival and take a bike trip along the picturesque Wisłok River valley.

From the beginning, the video was created with the idea of distribution via virtual reality headsets. When creating such a VR film, we must not forget to provide maximum comfort to the viewer. It’s all about smooth and steady shots and slow (compared to classic video forms) editing that doesn’t disorient the viewer.

While not wanting to give up on the dynamic, „music video” nature of the clip, we decided to use VR180 technology. Thanks to this, we managed to combine the best features of VR, namely realism and immersion, along with the lively nature of the clip. In VR180 we can make shots in which the actors get closer to the camera than in 360-degree 3D. At the same time, we maintain a wide viewing angle (180 degrees) and excellent realism of space representation thanks to the 3D effect.

We knew right away that we didn’t want to create another 360-degree „virtual tour” reminiscent of a moving Google Street View. (…) The result was a dynamic (for VR), video clip promoting the city, packed with features and effects that are difficult to achieve with 360-degree 3D technology.

The production of VR180 slightly resembles working with a conventional camera – we pick shots and, if necessary, move the camera from place to place to depict the surrounding space with shots. With the narrative conducted in this way, the viewer focuses on observing the virtual reality in front of him. This, in turn, allows for much faster, music video-style editing.

What to do in Rzeszów? Where can you see the film?

The video will be broadcast via VR headsets during the travel fair. It has also been published on our our Facebook profile, YouTube and OculusTV platform.